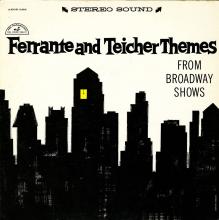 Broadway has two meanings. It's a geographical name for a street in New York City. But far more significant, Broadway is also a deeply-rooted historical American institution that brings a realm of dreams, desires and ambitions to reality before the footlights. Thousands of persons have devoted their entire lives to the theatre and its various aspects. Broadway has become a way of life.

A Broadway musical lives on after the last curtain call by means of its musical score. From almost every show produced, whether it be a smash success or a dismal failure, at least one song remains in the public's memory. Very often a show tune is the entire production's only claim to immortality.

The supreme test of a show song is its ability to stand alone with benefit of plot or explanation by means of stage dialogue. It is usually a song with a good basic melody and a minimum of gimmicks and instrumental trickery. The current New York musicals offer some of the most outstanding songs ever written for the Broadway stage. Selecting representative numbers for inclusion in this album was, to paraphrase and old saying, a choice of blessings. As originally sung by such stage luminaries as Ethel Merman and Mary Martin, the songs in this album have been given memorable twin piano and rhythm arrangements by two of the music world's most talented pianists–Ferrante and Teicher. The team has composed two originals especially for the album–Broadway after Dark and Curtain Going Up. Show tunes stand alone in their musical mood and content. They are easily identified in any group of songs. Ferrante and Teicher have perfectly captured the sound of the Broadway stage in their original compositions.

Long known for their piano sound effects, Arthur Ferrante and Louis Teicher have become an internationally famous piano duo. In previous ABC-Paramount albums, they have achieved startling results by equipping their pianos with various sound-producing gadgets such as paper, string, wood, metal and rubber (Heavenly Sounds in Hi-Fi ABC-221; Ferrante and Teicher with Percussion ABC-245; Blast Off! ABC-285). They have also recorded an album of light classical music for ABC-Paramount (ABC-313). This album of show melodies represents their first recording of this type, and is a tribute to the versatility of Ferrante and Teicher. Using no gimmicks, gadgets or tricks, they have arranged the songs in a style that is perfect for dancing, background music, or reflecting about shows you have seen or would like to see.

Both graduates and ex-instructors of music at the Juilliard School of Music in New York City, Ferrante and Teicher have made international concert tours, and have been seen on television with Perry Como, Steve Allen, Ernie Kovacs, Dave Garroway, Patti Page and Garry Moore.

All of the shows represented in this album are Broadway productions, and eight times a week New York's Times Square area plays host to hundreds of persons on their way to the land of make-believe–the Broadway theatre. Listen now to some of the current magic melodies that are capturing applause.

From the long-running show, The Music Man, to the newer hit, Bye, Bye Birdie, here are musical moments that will live long after the footlights have faded.

The Columbia/Harmony reissue of the late 1960s was a bit odd in that the monaural recording was used and only included 9 of the 12 songs. The cut tracks were "Everything's Coming Up Roses," "The Sound Of Music," and "Broadway After Dark."