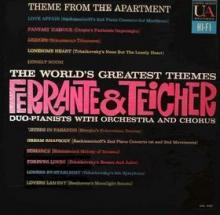 This is a superlative treat—a collection of “The World’s Greatest Themes” performed by the brilliant piano team of Arthur Ferrante and Lou Teicher. It’s a perfect mating of music with musicians against a richly-textured background of orchestral and choral arrangements.

Ferrante & Teicher, who launched their joint keyboard career a dozen years ago, have developed a wide and appreciative audience for their striking instrumental conceptions which blend the best in the classics and the “pops.” With their recent recording of “Theme from ‘The Apartment’,” Ferrante & Teicher displayed their unique popular appeal, ranging from concert audiences to teenagers. They demonstrated that good taste can be musically exciting for broad segments of the population.

It’s noteworthy that Ferrante & Teicher’s “Theme From The Apartment” began “breaking for a hit” immediately after it was released, climbing into the top bracket of the “charts.” These charts are the popularity poll of the music business and they get their votes from the disk jockeys and the juke biz operators — the people who are in direct touch with the listening public.

The success of both the “Theme From The Apartment” and “Lonely Room,” which are included in this offering, inspired Ferrante & Teicher to record this collection of other all-time favorites taken from the repertory of such immortal composers as Tchaikovsky, Rachmaninoff, Chopin and Beethoven. This music is old, like good wine, but it has been presented with an evergreen freshness.

Ferrante & Teicher have given these beloved melodies not only the plush sound of their twin Steinways, but a dramatic tonal coloration in the shimmering of the accompanying strings, the pulse of the rhythm section, and the blending of the voices with the instruments. Not only are the selections ideal for listening, but should you want to head for the dance floor, there’s a definite beat to carry you along.

Certainly no two people could be more qualified than Ferrante and Teicher to prepare and perform this music with a power and a beauty accessible to all. They have spent the greatest part of the young lives studying music.

From the time Arthur Ferrante was six years old until he was graduated, he was a scholarship student at the renowned Juilliard School of Music and won every award the school had to offer. Louis Teicher, also a child prodigy, attended Juilliard before he was six and graduated at 15, one of the youngest in the school’s history. Both became Juilliard faculty members after their graduation and their close association during their entire careers led them eventually to combine talents. Thus, in 1948, was born the duo-piano team of Ferrante and Teicher, hailed by critics and public alike for the consistently superior quality of their work.

In this recording, the sound is new, but there are no gimmicks. The pianos and the music speak for themselves as do the superb arrangements of Arthur Ferrante, Louis Teicher and Don Costa. Nick Perito conducts the orchestra and chorus.