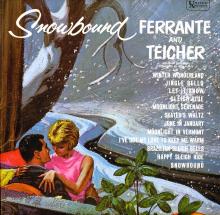 In his autobiography, "I Just Happened To Be There..." Making Music With The Stars, Nick Perito discusses the writing of "Snowbound" (pp. 158-159):

Meanwhile, back at UA Records, we decided to record a winter-holiday type album featuring Ferrante and Teicher called Snowbound. I composed the title song of the album and Ray Charles wrote the lyrics. Arthur and Lou were playing concerts on the West Coast at that time, so we decided to record the album in Hollywood. It was a last-minute project (as so many were then) and Ray didn’t have time to finish writing the lyrics before I left New York City. I stopped over in Denver to see my family on the way out to Los Angeles. Ray called and gave me a lyric that I didn’t think was exactly right for the mood that I was trying to create. While I was in Denver, I wrote the orchestra and choir arrangements of the song. Ray was unhappy about my comments, but he reluctantly promised to give it another try. Mind you, in just a couple of hours, he called me back with a set of entirely new lyrics that were absolutely perfect. Here they are:

Snowbound together, we’re snowbound together.
Thankful the weather locked us in,
Cheek to cheek with the fireplace aglow thru the night,
So thru the night our love keeps glowing, growing,
Knowing the blisses of whispers and kisses,
Cozy and comfortable and warm,
Just a peaceful pair, happy to be stranded there,
Two together snowbound, blessing the storm.

This is an excellent example of this man’s genius. In later years, I would have the good fortune to see him do this on countless other occasions. Yo, Ray!

Outstanding performances are the rule rather than the exception with Ferrante and Teicher. Thus it is no surprise that SNOWBOUND continues the pattern of complete entertainment, excellence of performance, and offering a musical program with appeal to all who enjoy music, from the Teens to their grandparents.

Seated at their twin pianos, Ferrante and Teicher paint a magnificent musical scene of a Winter Wonderland in this album. From the typical American Sleighride to Brazilian Sleigh Bells and the Russian Sleigh Song the listener is transported through a true Fairyland, complete with the luxurious backgrounds which have become identified with the Ferrante and Teicher best-sellers.

There is no season of the year more compatible with music than Winter. Indeed, being Snowbound with Ferrante and Teicher can, and in fact will, provide an unforgettable experience. It makes no difference if you are warm in an apartment or penthouse, or curled up in front of a roaring fire as the snow falls outside, the music will fill your home as it moves from one song to another, each carefully selected to maintain the mood of the album, and to offer the ultimate in enjoyment.

It is well to note that the Moonlight Serenade arrangement was done by Don Costa, Snowbound by Nick Perito and the balance by Ferrante and Teicher. We think you will agree that all are exceptional in every respect.

Like many of the 1980s Liberty reissues, this album was available on Lp and cassette in an abridged format. They omitted "Skaters Waltz" and "Moonlight Serenade." They butchered the cover, removing "Skater's Waltz" but leaving "Moonlight Serenade" in the listing!