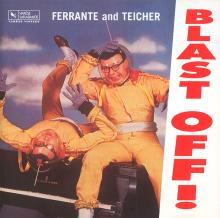 CD reissue of the 1959 Lp Blast Off! with four bonus tracks from Ferrante and Teicher with Percussion.

Not long ago, a lady walked past a tall building in New York City, looked up and, forgetting her ladylike composure, did a quick double-take. What she saw was a huge grand piano scampering up the side of the building, quickly followed by another. Any self-respecting hi-fi or stereo fan could have told her that Ferrante and Teicher were in town.

As a violinist carries his instrument, so do Arthur Ferrante and Louis Teicher carry theirs – almost as easily. Pacing their two Steinways neatly away in a specially designed truck, and surmounting all barriers, such as inadequate elevators – necessitating a hoist job through the window – this unique piano team has excited the ear and imagination of audiences from coast to coast.

The concert grand pianos belonging to these keyboard stylists could easily take a musical place in the space age alongside their scientific counterparts, the nuclear reactor and the moon rocket, even though they are the ordinary instruments available in any piano store. Because of the duo-pianists’ innovations, sounds emanating from their twin 88’s are far from identifiable with the music made by your living room piano.

Equipping the basic piano with devices such as rubber wedges, wads of paper, bits of wood and metal bars, picks, mallets, and numerous other gadgets, the unusual pianists produce extraordinary sounds. Many listeners refuse to believe that such effects can originate from the ordinary Steinway concert grand piano. By electronic methods of recording, the pianos’ ranges have been extended a full four octaves – two above and two below the normal range of the ordinary instrument.

Because repeated difficulties have arisen in securing two concert grand pianos in towns where they are booked for a performance, Ferrante and Teicher have resorted to transporting their own instruments. Installation of the sound-producing gadgets is made on the spot, which creates its own problems. A recent experience taught the piano partners to keep a close watch on their pianos after they have been equipped with props. A TV stagehand, unfamiliar with the act to follow and noticing the rigged pianos, yelled, “Who put all this junk in here?” and studiously proceeded to remove it. Camera-time found the two musicians frantically replacing their sound effects.

A Ferrante and Teicher concert is an extremely active experience. In order to pluck the piano’s strings, strike the underside of the case, or manually produce sounds other than on the keyboard, the two must stand up, lean over, and move to various positions around their pianos. This activity combined with the unexpected results make an evening with Ferrante and Teicher one to remember.

In addition to performing, both members of the piano duo are gifted composers and arrangers, responsible for several of the selections herein. With typical professionalism, Ferrante and Teicher have tailored their talents to the demands of high fidelity and the stereophonic sound era. This album will demonstrate the highs and lows on your sound equipment as perhaps no other music can. The scoring necessary for these numbers often has fellow musicians wondering if they’re looking at hieroglyphics or another form of ancient script.

You may have seen Ferrante and Teicher on your television screen, appearing on programs hosted by Perry Como, Steve Allen, Ernie Kovacs, Dave Garroway, Patti Page, etc. They have also appeared in England and Canada. Their two previous albums for ABC-Paramount, Heavenly Sounds in Hi-Fi and Ferrante and Teicher with Percussion–also available in stereo–have been enthusiastically received. Although the team has performed with other instruments, this album was recorded with only two pianos.

The duo-pianists are equally as skilled with the classics as with their original interpretations. Their classical performances have been acclaimed as fine musicianship and ensemble playing of hair-trigger precision. Every performance contains a musical balance of the two types of selections. In this, the team’s third album for ABC-Paramount, are presented the unusual fascinating futuristic sounds of the keyboard – Ferrante and Teicher style.

Ignition! It all started with their interpretation of Ravel’s “Bolero.” When Arthur Ferrante and Louis Teicher tried to recreate the sound of the drum for the world-famous classical piece with only their twin pianos, they began an avant-garde musical odyssey that helped launch their careers into high orbit. Looking for a way to mimic other instruments (their producers would not budget them for an entire orchestra), they developed the use of the “prepared piano,” consisting of “mutes” (custom wedges of rubber, felt and paper that they inserted into the piano strings). This created the effect of bongos or conga drums, and the combination of the two sounds magically became not a drumbeat, but a calliope.

The resulting sounds were new, fresh, and original. Clearly, they were onto something. They developed and named other musical gadgets. There were “sticks,” which were pieces of metal used to produce the sound of a harpsichord or honky-tonk piano and “bones” which could mimic xylophones and temple blocks. There were “strums” which could reproduce the harp, guitar or zither. They even used “secret effect X” which gave the illusion of chords being played backwards.

The bonus tracks on this CD are from the blazing Ferrante and Teicher With Percussion, which marked the first time the dual prodigals resorted to other instrumentation and extra musicians. As you will hear, Ferrante and Teicher are Titans of the Keyboard, exploring way-out sounds with and without percussion. You’re in for a weird and wonderful listening adventure quite unlike anything you’ve ever heard before. Prepare to Blast-Off!