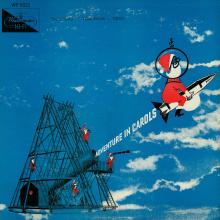 THE MUSICIf you are looking for something different in Christmas music — if our Christmas office parties or gatherings at home have been too much the same for the past few years, and you would like to introduce a refreshing new note into the proceedings—let pianists Ferrante & Teicher take you on an ADVENTURE IN CAROLS. The paths along which this talented team will lead you bear the old names with which you are familiar — White Christmas, Jingle Bells, Santa Claus is Coming to Town, and others just as popular — but the names, plus the famous melodies, are the only things about this recording which bear any resemblance to any other version of these carols you may have heard. For this recoding Ferrante 7 Teicher arranged the carols for two pianos—or should we say that they arranged two pianos for the carols? Actually, they did both—for, if playing conventional pianos in the conventional manner did not produce the effect the boys were after, they worked on both music and pianos until they got just what they wanted.

Westminster’s studios never had seen anything like the session that produced this unique recording. All over the country, of course, audiences for years have seen Arthur Ferrante or Louise Teicher rise from his bench in the middle of a performance and address himself to the innards of his Steinway—alternately muting, plucking, strumming and beating the strings. Nor does either of them hesitate to use his elbows, forearms or knuckles to elicit a desired chordal effect—not to mention an assortment of wooden and metal gadgets designed to give the pianos a new personality altogether. These unorthodox and sometimes gymnastic doings are not calculated to amuse. They are an integral part of the team’s very special arrangements. Their goal always is to achieve the maximum tonal contrasts and to simulate orchestral color as vividly as possible within the limitations of pianistic dynamics.

But no concert audience ever say what Westminster’s engineers saw — or ever heard what has been captured on this recording. It’s not a single recording, to start with, but a double one—no pun intended. The boys played everything through once, then donned earphones and went over the same ground again, interpolating all manner of fancy figurations and fugal folderol. What with a profusion of microphones stationed over the keyboard, the gadget-laden strings and the paired celestas, the results herewith are unlike any pianism, duo or otherwise, that you have ever experienced. It is as if Santa had, at last, discovered high fidelity. After so many years of hearing the same old tunes played the same old way, Old Nick undoubtedly would join everybody else in welcoming these new Christmas sounds.

THE ARTISTWhat other duo-pianists can boast that they have played together since the age of six? Arthur Ferrante and Louis Teicher were fellow prodigies of New York’s famous Juilliard School of Music, and even while students they appeared as a team. After graduation they gave a few joint recitals, then decided to take time out to prepare a really distinctive repertoire. Together they returned to Juilliard, this time as fellow members of the faculty, and spent all their spare hours for the next year or so working over the standard pieces cleansing them of every hackneyed cliché. Their professional debut as a team took place quite a distance from the concert hall, for they bowed in as a popular piano duo at New York’s sophisticated penthouse night club, Spivy’s Roof. They were such a hit with the starlight crowd that they went on to more cosmopolitan boîtes like the Blue Angel, the Little Club and the Ritz-Carlton Terrace. Since 1947 they have been crisscrossing the country annually, winning laurels everywhere for what The New York Times called their “prodigious technical feats.” Radio and television audiences know them for their guest stints on Piano Playhouse, and the Firestone, Telephone, and Carnation hours… They have also appeared with leading symphony orchestras throughout the country. Their gift for blending the classic with the modern and the “heavy” with the “light” their extraordinary sensitivity, their technical perfection—these are just a few of the reasons why one stern Manhattan critic, echoing the national consensus, called Ferrante and Teicher “the most exiting piano team of our time.”

THE RECORDThis recording is processed according to the R.I.A.A. characteristic from a tape recorded with Westminster’s exclusive “Panorthophonic”® technique. To achieve the greatest fidelity, each Westminster record is mastered at the same level technically suited to it. Therefore, set your volume control at the level which sounds best to your ears. Variations in listening rooms and playback equipment may require additional adjustment of bass and treble controls to obtain NATURAL BALANCE. Play this recording only with an unworn microgroove stylus (.001 radius). For best economical results we recommend that you use a diamond stylus, which will last longer than other needles. Average playback times: diamond—over 2000 plays; sapphire—50 plays; osmium or other metal points—be sure to change frequently. Remember that a damaged stylus may ruin your collection.