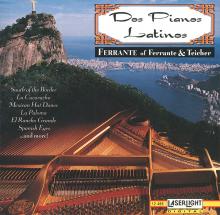 Laserlight is pleased to present the second recording of “Two Pianos” by Ferrante of Ferrante & Teicher. The first recording Two Pianos in Italy is available at all retail outlets that sell Laserlight products.

Ferrante—one of the world’s great musical entertainers—is back where he belongs! On the road again!

Ferrante & Teicher happened in the great tradition of musical “luck” —two superbly gifted and trained pianists in the right place at the right time with the right stuff.

The right place was a recording studio, the right time was AM Radio in the Sixties, and the right stuff was the ability to create a dazzling sound with two pianos against a lush orchestral background; a sophisticated, elegant sound that collected millions of fans all over the world who fell in love, and found special moments to the splendid artistry of Ferrante & Teicher. Olympic skaters and gymnasts competed to that sound; Presidents and their White House guests were personally entertained at State dinners, and fans bought millions of singles and albums to enjoy Ferrante & Teicher in their own various ways.

In 1989, the retirement of Ferrante & Teicher from successful touring created both a dilemma and an opportunity for Ferrante, who was determined to continue his career but reluctant to perform solo after all those phenomenal years with Teicher. The solution was recording. Great musicians continually seek variety to challenge and create new possibilities of musical expression. Ferrante experimented with electronic keyboards as a background sound instead of the traditional Ferrante & Teicher orchestral support.

Creating new directions for audiences is a familiar challenge to all successful performers, and part of the new Ferrante in concerts as well, with new music and new layers of sound over the fullness of the original F & T ideas. The sound that made Ferrante & Teicher happen will be heard again in a new and distinctive way.

An invitation to perform formal convention entertainment created the necessity for Ferrante to determine how he would perform as a solo pianist. Ferrante wanted to maintain the integrity of the two piano F & T sound, but performed on one instrument. Ferrante & Teicher alternated the melodic line using the second piano for dramatic counterpoint playing glissandos, arpeggios, and flying triplets. To re-create that sound with one piano was a matter of “filling” where the second piano would be expected. “It’s a simple matter,” Ferrante smiles, “of playing twice as many notes twice as fast in all the right places.”

Ferrante began playing the piano at age two, giving his first concert at age seven. The following year he began studies at the Juilliard School of Music. Upon graduating from Juilliard with honors, he became the accompanist for the internationally acclaimed dancer Paul Draper, and later harmonica virtuoso Larry Adler when both Draper and Adler toured jointly.

Ferrante worked with Draper during the filming of Paramount Picture’s film Blue Skies, at which time he met Irving Berlin and was offered a position on the Paramount music staff. Acknowledging his lifetime ambition to perform as a duo pianist, his first written composition at age nine was March for Two Pianos, he turned down the job and, in 1952, combined forces with Lou Teicher to form the piano duo of Ferrante & Teicher.

Ferrante & Teicher made 178 albums and were responsible for major pop hits such as the movie themes from The Apartment, Exodus and Midnight Cowboy, as well as an instrumental recording of Tonight from West Side Story. They have performed more than 4,000 concerts with every major symphony orchestra around and have entertained at the White House for three different Presidents. They also appeared on numerous television program starting as far back as the early fifties. With 22 Gold records and numerous awards, Ferrante continues to please his fans with his timeless piano artistry.